What Sunglasses Should You Wear With Your Face Shape?

Top 10 Reasons Why You Should Always Wear Sunglasses

Express Your True Self With These Special glasses

If you think Katrina Stuart is your typical LA pop star think again. For a start she’s not from LA. Secondly she most definitely isn’t typical. There’s a no-nonsense attitude that radiates from her naturally charismatic self, but you can tell this is an honest and authentic side of her character rather than some faked media-trained persona existing purely for the sake of record sales.

Time to read all about this pop star's rising fame...

Katrina’s passion is music. If she wasn’t where she is now, Katrina says she would have opened a music studio, taught piano, “just something related to music”. There’s such sincerity and humbleness in her voice that you know it’s true. There’s no question that you could probably find her back in her home-town of Toronto teaching music to the next generation of kids and still be the same happy and passionate individual she is now.

Katrina Stuart's true passion is music, but her talents are many

From a young age, Katrina took to music like vinyl to a record player, tinkering on the piano at just four years old. It quickly became apparent she had a natural talent for music, going on to train at the Royal Conservatory and getting her teacher’s license for piano at just fifteen. She plays guitar (self-taught of course), and wants to learn violin - you get the impression it wouldn’t take long for her to master.

Forging her path in the LA music industry

Posting videos up on YouTube from when she was small, attention began to build following performances of covers of Beyonce, Gwen Stefani and Maroon 5, and she soon got the attention of a music producer who invited her to LA. Whilst they would eventually part ways, it’s clear she’s managed to forge her own path in the cut-throat world of the LA music industry. In the last couple of years she’s released a dozen singles, the album ‘Under My Skin’ to positive reviews across the board, and also gone on tour.

The name of the tour was the SOS Tour: Stand up, Own Up, Speak Up. Encapsulating that sense of emboldenment she wants to send to all her fans, you get the impression there’s a strong desire in Katrina to make brave the bullied, strengthen the victimized, and give courage to the marginalized. She says she wants to empower women, to “stand up and realize I can’t be treated like this, not any more”.

Confidence is not the absence of fear, but moving forward even in the face of it, and Katrina exudes that kind of bravery.

She talks a lot about not giving into peer pressure and standing up for yourself, and this is only because she has gone through it herself. Confidence is not the absence of fear, but moving forward even in the face of it, and Katrina exudes that kind of bravery. Her first big shows were at the world famous House of Blues and The Viper Room where she says she “got nervous like everyone does”.

Many friends of Katrina feature in her latest music video. Including famous celeb Colby Brock, 'parner in crime' with Kat's boyfriend Sam Golbach

There’s strength in her music and lyrics, but the kind that emanates from deep inside that’s total and complete. Her latest release, Who She?, is an unapologetic indictment of the unfaithful. The lyrics aren’t of someone bitter and emotionally wounded - Katrina doesn’t play the victim, pointing to the fact that the blame falls squarely on the wrongdoer and not the wronged.

"Under My Skin" music album

The subject matter of her album ‘Under my Skin’ gives us a glimpse perhaps of the experiences she went through to build up this inner-fortitude. On the surface you might think her songs are about the highs and lows of romantic relationships, but they look to be descriptions of any of the relationships that color a person’s life: not just in romance, but in family, friendship, business. She’s not scared to get into the weeds, acknowledging not just how others let her down, but also her own shortcomings, like letting people in when she knows it’s a bad idea (“Vampire”). 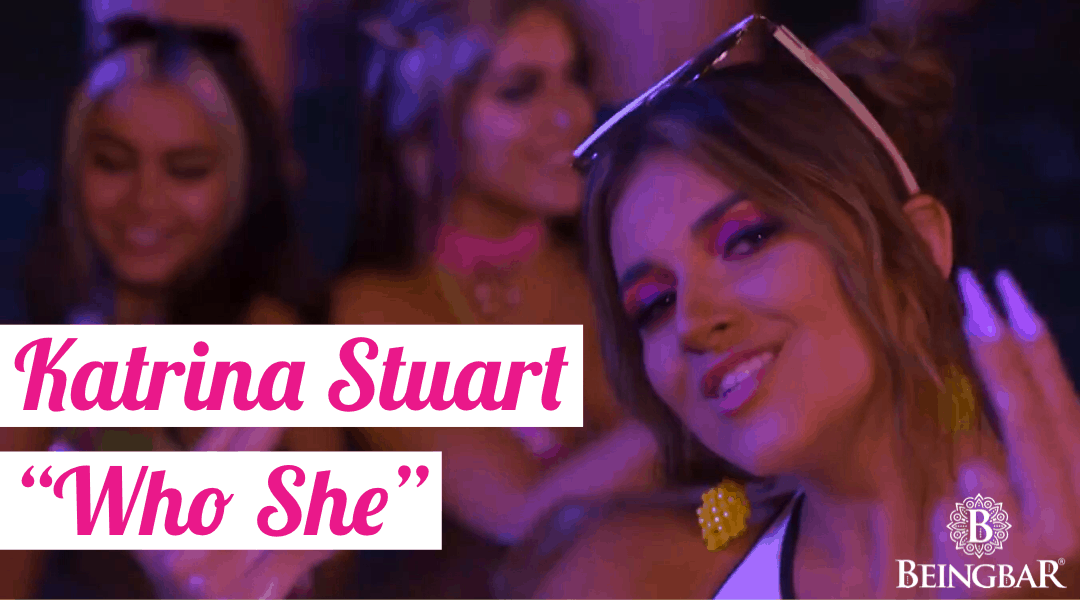 There are the highs and the lows, the deep disappointments. From start to finish her album expresses the unambiguous realities of relationships. When she talks about her own life she says "it’s been a journey, meeting the wrong people, pushing through that and learning from your mistakes”. What has that taught her? “Don’t be afraid of starting fresh, starting from zero. There’s always a new path, and you can begin again.”

Katrina’s idols are your classic pop and and RnB singers, and, unsurprisingly, all definitively strong female role models. Christina Aguilera’s voice, Rihanna’s vibe, Aaliyah’s style. Most of all Alicia Keys: “I heard her playing the piano and singing, and immediately I said to myself ‘that’s cool, I want to do that.’ She’s a big inspiration.” Within her early singles you can hear the Alicia Keys-influence, but her latest releases show that now she’s very much creating her own sound.

Stay true to yourself

Indeed her own advice for young artists (especially those making the move to La-La Land) is to “stay true to yourself, because that’s always hard. It’s easy for people to lose themselves in LA.” It’s been a journey for Katrina, and she’s clearly happy with where she is now, we know that this is only the beginning for her. There’s a lot more we can expect from this burgeoning talent from Toronto, and we know she won’t disappoint.

Katrina Stuart in her music video "Who She"

Kat Stuarts "Who She Music Video

As indicated earlier, Katrina's new music video "Who She" was just released. This song and the video are only the next step in here ever-growing repertoire of catchy music.

What is special about this particular video is that you will see many glimpses of the close group of friends that she hangs out with. First of all her boyfriend Sam Golbach, who is a big star of his own. Sam is known from the Social duo "Sam and Colby", together with Colby Brock.

The 'Making Of' of the music video "Who She" from Katrina

The incredible team involved in the production of the music video "Who She":

The lyrics ask, “So tell me baby, who she wearing all that Gucci?”, but in the music video for Katrina Stuart’s new single release, "Who She", the sunglasses she’s wearing are by BEINGBAR®, the sustainably-designed eco-conscious sunglass brand, putting style, planet Earth and awesomeness at the heart of their brand.

Find them at www.beingbar.com, “The Ultimate Conscious and Sustainable Sunglasses and Accessories. Hand-built with Natural Materials and True Principles”

At BEINGBAR we walk the talk. Our journey started in 2011 and we set out to make the highest quality eco-friendly fashion gear and eyewear. After realizing the available products are often flawed and samey. We had an idea about how to do things better and as a team we started working on the solution. And since that moment we work everyday to make it better.

Most of our eyewear is made with fastgrowing bamboo elements and we avoid the use of plastics at all cost in products, production and logisics. And more importantly, we make sure or products are built to last, not to replace. Visit beingbar.com for more information.

Not sure the best way to get started? Follow these simple steps to hit the ground running:

Step #3 - Ordering and Maintenance of Your Sunglasses:

Step #4 - Connect With The Community:

Made To Last | Environmentally Friendly